I just opened the December 2020 edition of “O” Magazine with of course Oprah’s Favorite Things – always interesting. This issue however included an article of 20 young women visionaries, their causes and thoughts. 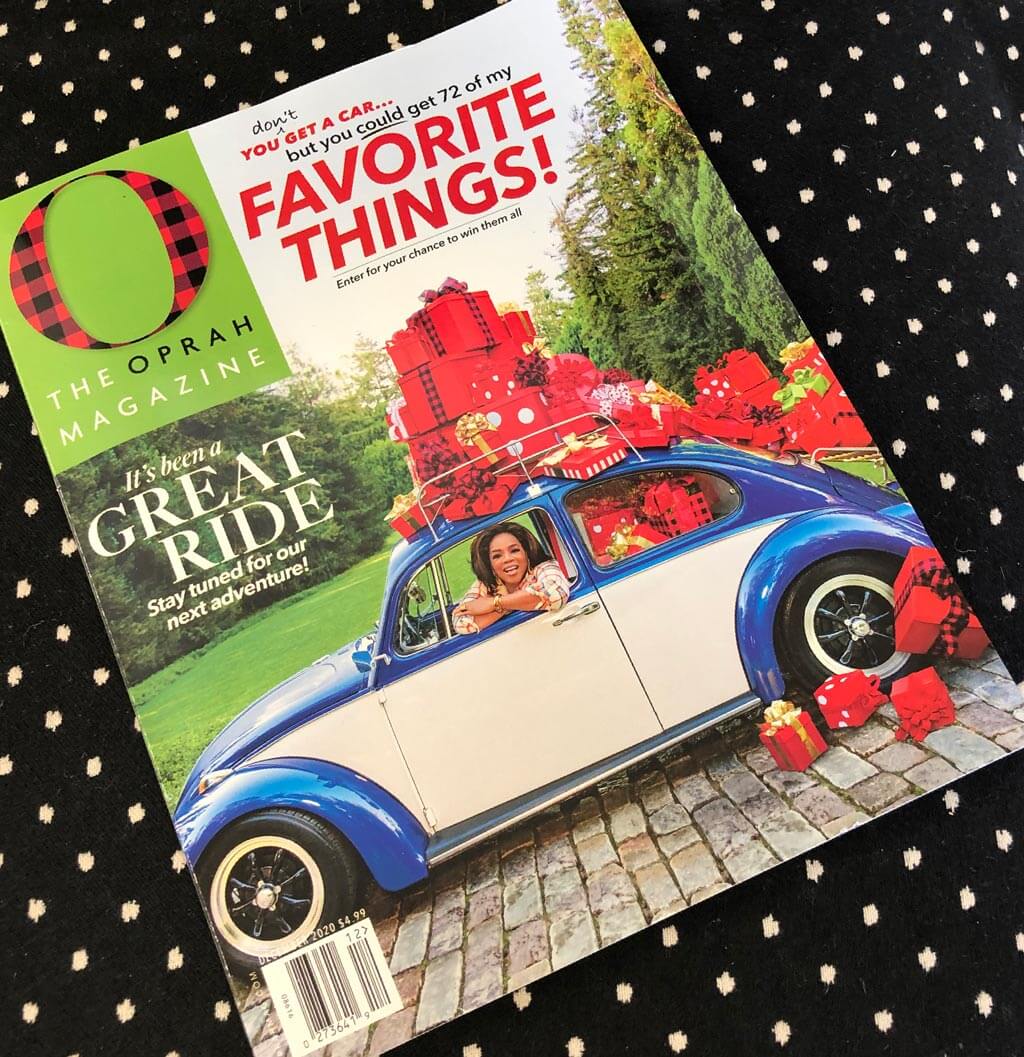 I was particularly moved by 26 year-old Miranda Wang, a founder of BioCellection, a company that develops technologies to break down plastics and build them back into consumer products.

Her quote: “There’s always a way to get to a win-win. If people don’t see that, they’re not aiming high enough or putting in enough creativity.”

Wow. Her words resonated with me from many perspectives from a world view down to our decorating and design philosophies we at Chameleon Style® espouse daily.

Chameleon Style® has always been about win-win decorating; Couples who have different tastes or style preferences can each have his or her own look without compromising, people who love to decorate for the seasons can enjoy each season with fervor without having to store lots of decorations…and the best way to achieve win-win decorating begins with inspiration fabrics.

Besides being a collector (borderline hoarder) of fabrics I also am a collector of memories. One of my most exciting involved my desire and efforts to have Oprah discover Chameleon Style®!

On May 14, 2010 upon receiving my weekly email newsletter from Furniture Today Magazine I quickly fixated on the announcement Oprah was having a competition “a-la-Survivor” to select 10 people to pitch their own show on Oprah’s new network.

The contest was simple – upload a less than 3 minute video and encourage friends to vote online by end of June. One of the categories was design. Since my kids had just given me a Flip Cam for my birthday I was ready. Liz (our web designer) and I began mapping out what our Chameleon Style® Design Show would look like.

There was no time to lose 10lbs or worry about a makeover. We couldn’t afford to waste a minute of people voting. Liz and I began filming daily until we finally had our “show” ready to submit. We filled out the lengthy application and joyously submitted the video. Liz went home. To my dismay about a half an hour later I saw the email. The video was “not accepted – please check the guidelines and re-submit”.

We were devastated but not deterred. We examined the tape. Maybe by having the word “Singer” on my sewing machine violated the copyright laws. We taped over it, edited and re-submitted the video.

Again about a half an hour later we received another rejected email.

For the next 5 days we re-filmed, re-edited and submitted 6 more times. Each rejection was more painful and frustrating than the previous one. Liz was going to go on vacation if we couldn’t get it right.

Then on Sunday afternoon after 7 failed attempts a customer-attorney came into the store. We told him of the dilemma. He reviewed the guidelines then commented that perhaps the reason was I had inserted a sentence at the end of the video in Spanish – “Estare encantada hacer mi programa en Espanol”.

I thought it was clever but his input was that perhaps if scores of people are reviewing the video and hear words they don’t understand it might be an automatic reject.

The next morning Liz and I re-shot the video for the umpteenth time without the Spanish. It was 5 p.m. on Friday of Memorial Weekend. This was our last shot – (pun intended). Liz pushed the send button then left for the weekend. The perplexed look on her face as she left is still fresh in my mind.

I continued to clear the register at the front counter, sort new orders leaving the computer screen open nervously awaiting a response. About 20 minutes later I heard the bleep that a new email was received. Timidly I threw a glance at the title of the email. I noticed even from afar it was not like the rejection emails.

I pulled closer to the screen… and then the glorious words appeared: “Are you as excited as we are?”

I was so emotional I could hardly type the keys to open the email. Our video was indeed accepted. I burst into tears of joy – sobbing I called my husband Win to tell him of the great news!

Though 10 years old the message in our video about Chameleon Style® and our design concepts are still so relevant and definitely win-win! With the video now posted and people voting online, the story of the power of Oprah was only beginning for me and my hope is that you will read on about the rest of our Oprah adventure after viewing the video?

Here is the original video we planned to submit to Oprah:

And now – the rest of the story…

With thousands of people submitting videos and most much more “Facebook-Savvy” than I, it looked like there was no chance to accrue the votes. But live auditions were also held, one in southern California on June 19th, my husband’s birthday! He saw how much this meant to me. I was so grateful for his support and encouragement to go ahead and make the 5 hour drive to Laguna Niguel Mall Audition site.

Arriving at 4:30 a.m. I obediently and optimistically fell in the long line cascading down the hill leading up to the shopping center’s parking lot along with (I was later to find out) another 5,000 hopefuls waiting to get 60 seconds to pitch their program idea to a producer. All in line were so excited, enthusiastic, helpful, KIND, and each readily making friends with those nearby.

I think there was every age, gender, color, and mindset represented amongst the auditioners.

As we waited patiently my new best friends and I watched a very elderly woman jaywalking with a wheeled suitcase across the four-lane road leading to the audition area. Several people jumped out of line and proceeded to help her cross. The Sherriff at the top of the hill also saw what was happening and jumped into his vehicle. To our surprise he used his vehicle to block any other traffic and helped the lady cross safely – no ticket or reprimand… just wished her good luck!

And so it was throughout the rest of the day, example after example of human kindness at its best. We weren’t competitors. We were partners in this adventure. It was 11:00 before I would reach the upper parking lot only to see masses of people in snakelike lines. By this time we pretty much knew everything about each other, divorces, babies, hopes, fears and most of all dreams. Oprah’s staff had water bottles and staffers circulating often to keep everyone’s spirits up.

Peter Walsh, professional organizer was there weaving amongst the crowd with a small camera crew. The team spotted my oversized brightly colored “Chameleon Style® Power Pillow and Peter approached me with cameras and a staffer with a clipboard to sign filming waivers! Peter then proceeded to question the pillow on camera.

My immediate thoughts were that maybe I indeed had a chance! My surrounding friends were so congratulatory after the brief filming. I was on a true high. A few minutes later a young woman in a different nearby line had apparently gone to the restroom. She was a huge fan of Peter Walsh and was distraught that she had missed him. Gaining confidence from my recent encounter with cameras I boldly went out of the line and approached his crew. Would they consider returning to our area and meet this woman? And they did! For a brief moment I was the hero of that entire section! I had helped someone else and I was feeling the love.

In the producers’ tents they would take about 20 people at a time for the 60 second live audition. As my surrounding group neared the “gate” I was number 21 and had to wait for the next round. I quickly turned around and tried to make new friends with those that would be in my new group. No problem! – Again every single person was so in tune with helping and encouraging one another that I was welcomed with open arms.

When it was our turn, we all filed into the tent with our “producer”. He carefully explained how important it was to be only 60 seconds and what the signals would be to wind up the presentation. He made us feel relaxed even though I am sure we are all shaking inside. One elderly Asian lady who could barely speak English had a powerful message of peace, humility and world understanding for her “Own Show”. She could barely get out the sentences let alone within the 60 second time limit. She remained determined. The producer responded in kind and let her complete her pitch. We all applauded. In the end I think we all felt good about our “performances”, congratulated one another then went our separate ways.

As I reached my car to drive home I started to cry with mixed feelings of joy, relief and huge anticipation. I so wanted to share the experience but my “6 hour-in-line-friends” had already left. Then my cell phone rang. It was Cindy. They were all at a nearby café. Would I join them for lunch? One might think that this is an every day occurrence – no big deal for most people. For me it was an emotional first. I don’t think I was ever invited by a group of girls/women for lunch in my entire life. I’m kind of the intense-driven-serious personality types and probably not very much fun. This was a first and after wiping my tears I joined them for a laughter-filled afternoon sharing our experiences.

My point in describing all this is that for this one magical day everyone in the “Oprah Orbit” without exception, was on his or her best behavior. I can only imagine – (hmmm – John Lennon comes to mind) that if all the people of the world could be doing their best everyday to love, help, be kind, live their best life… what a wonderful world it would be.

Remembering this experience in Covid 2020 is soothing and gives me hope. I hope it speaks to you too!

5 thoughts on “The Power of Oprah”