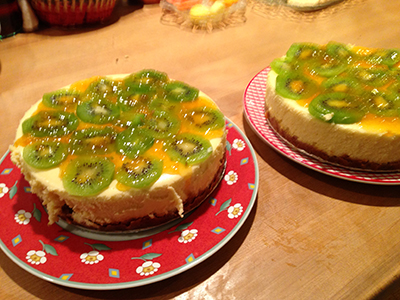 I have a long history of loving cheesecakes.  I learned how to make an easy refrigerator version while living in Israel as a student in the 70’s.  As a young housewife, my friend Jan made the most incredible cheesecake ever but because she had a small side business would not share the recipe.  My competitive side began a quest for developing a cheesecake comparable to hers.  The following recipe is, according to my family, fabulous and is a Christmas and Mother’s Day tradition.  Here’s the recipe and I have a couple of cheesecake adventures below.

Steps
Make graham cracker crust according to directions on package in a 10” spring form pan.
Lining the removable plate of the bottom of the pan with aluminum foil really helps to remove cake later to a display platter.

For Filling:
Preheat oven to 500F
In a large mixer bowl, blend cheese, sugar, flour, peels and vanilla at a high speed. *
Beat in eggs and yolks one at a time.*
Beat until smooth occasionally scraping bowl with spatula.  This will really fill the bowl so careful.

Beat in cream.
Pour into pan.
Bake 10 minutes at the 500 degree temperature.
After the 10 minutes lower oven to 250F and bake for 1 hour longer.
Remove carefully from oven and cool on a metal rack until room temperature.
Refrigerate covered for at least 8 hours before adding topping.

For Topping:
Peel and thinly slice kiwis.
Place on cake top.
Warm the preserves with the Grand Marnier in microwave at a low temperature about 1 minute.
Pour mixture over kiwis and let drizzle down sides.

This cake with the recipe above stands about 4 ½ inches high so this year I used 2 smaller 8” spring form pans and though shorter, was just as good and went a lot farther!

Where the recipe says use a large mixing bowl, please do so.  The first time I made the cake I used my slightly larger than medium size bowl and well, when I got to the last eggs to enter the entire mixture was spewing all over the counter.

Having learned my lesson I went to the largest bowl that would fit under my 1940’s Mix Master I inherited from my grandmother.  This time following the directions meticulously I beat the mixture at high speed and just about the time the last egg yolk was dropped into the swirling mass, the Mix Master started sputtering and a goopy tar like substance oozed into my beautiful creation.

Not to be deterred, the next day I went out and purchased a new mixer, all new ingredients and started in.  As the recipe states, and as an experienced cook would know, always crack eggs individually in a different container before adding to your mixture.  Likewise I was diligent up until the last yolk… well you can guess what happened.  The last yolk was rotten.  I did give up on that cake for that event but eventually made dozens of wonderful cakes.

One last “adventure.”  Many years ago, 1983, my former in-laws were visiting from Israel during Passover.  I planned to show off my wonderful cheesecake for a large party.  The cake was complete a day ahead of schedule when my former mother-in-law pointed out that the cake had flour in the batter and cookies in the crust (leavened) so not suitable for Passover!  Though not usually creative in the kitchen, I made a new batter eliminating the flour and used 3 tbsps of matzah flour.  For the crust I found out that true Italian amaretto cookies have no flour and made the crust out of Amaretto cookies!  It was delicious.