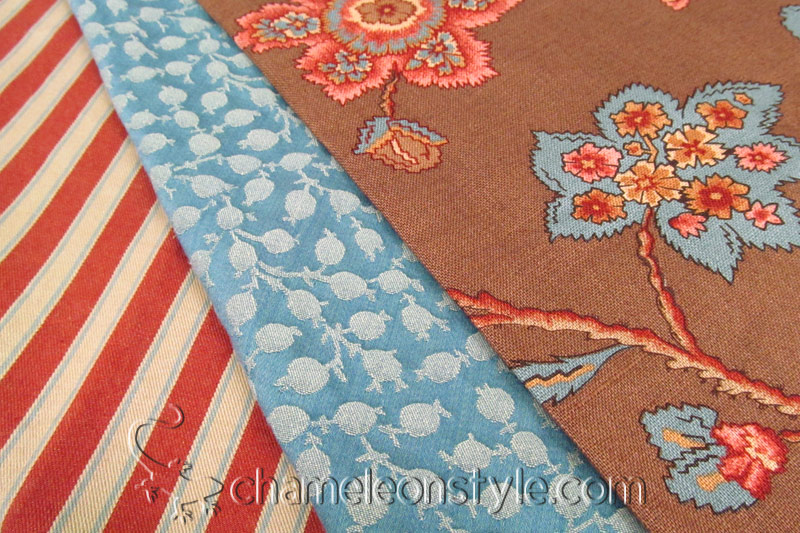 As you may already know, we really love the French General fabric collection by Fabricut. This week we wanted to show off a few more of the fabrics from this gorgeous collection. Each of these fabrics shown come in several colors ranging from neutrals to beautiful and unique color combinations. This combo shows the array of traditional French blues and reds, as well as a touch of rose and gold.  All three of these fabrics can be used for several types of projects from pillows to upholstery.

The popular French décor style emerged during the early 19th Century from the court of Emperor Napoleon Bonaparte. The French gentry were inspired by the vibrant colors Egyptian tombs that they had seen during their military sessions in Egypt. Azure blues, rich greens, red ochre and acid yellows became popular for interior decoration when they returned home.

Even today, you’ll still see use of a lot of draperies, sometimes in bold prints, which were used to soften the formal arrangement of furniture that came from Napoleon’s military.

Traditional French décor – The fabrics used in this décor style are often soft, as well as luxurious. Gray, brown and cream are classic neutrals that may be accented with soft colors such as rose, sage or pale blue. Classic French design features a lot of embellishments and details such as ornate carving in wood furniture, embroidered and lace trims and fabrics.

French Country décor – The colors and details in this design style are inspired by the wildflower colors seen on the hillsides of France. Light blue, yellow/gold, red, green, and lavender are commonly used in floral and fruit prints. The French General collection certainly has a variety of patterns that use these colors, as well as some that are more neutral and more appropriate for the Traditional French look.  French Country takes a lot of cues from the Traditional French style, also using carved wood and embellishments, but it is a more relaxed decorating style for country living.

From right to left:

A few of our Favorite Coordinates: