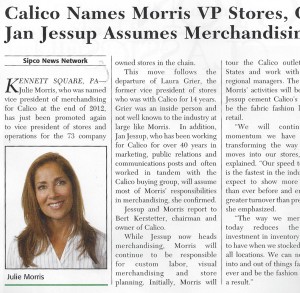 One of my favorite stores is Calico Corners even though they are our “competitor”. During the recession they switched to a central inventory distribution rather than carrying stocked fabrics in their stores. I understand this was a good business move but even though I own Chameleon, I missed not being able to walk out the door with a yard of fabric for a new pillow.

But many changes at Calico Corners were announced in the trade newspaper during the Highpoint Show. Julie Morris was promoted to Vice President and Calico had an entire buying team touring the show. They definitely were “adored” by every vendor they walked near. I too hoped to try to get Julie’s ear to tell her about our amazing Chameleon Fine Furniture and what a great addition it would be for Calico Corners to carry our furniture. With everyone having to keep on the tight 1/2 hour appointment window, I imagined it would not happen.

Then on Tuesday (our last day) Win and I were walking the temporary booths. We spotted a lovely display of hundreds of finials for drapery rods with two Taiwanese girls manning the booth. One girl named Delphine, said we couldn’t “buy” yet because they don’t have a distributor. I volunteered to take them to the Fabricut-Trend booth two aisles over. Win waited in the finial booth with all the bags etc. When I got to Fabricut-Trend booth, the Calico Group was just leaving and sped off to another area. I introduced “Delphine” to a Fabricut-Trend exec. I summarized that she needed a distributor and that perhaps that would fit into the Trend line! He was delighted.

Once they got to talking I rushed to see if I could find the Calico girls and as I was returning to Win, I spotted them in the Lacefield Textiles booth. Not wanting to rain on the Lacefield parade I tried to stay alert to an opportunity. After about 10 minutes I got the opportunity and introduced myself. Julie was absolutely delightful and gave me her business card to contact her about Chameleon Fine Furniture in the near future. I was ecstatic.
Meanwhile Win joined me and said he was afraid to sit at the finial booth any longer – it turns out that Delphine was absolutely in awe that she had made a valuable contact and they started giving Win anything they could from Taiwan; crackers, cookies, napkins – he said he was afraid she was going to cry with joy. Of course I am happy that I could help someone in a small way – but I realize that had I not done that… I would never have met up with Julie and Calico! I just call this my Joy Luck Experience.